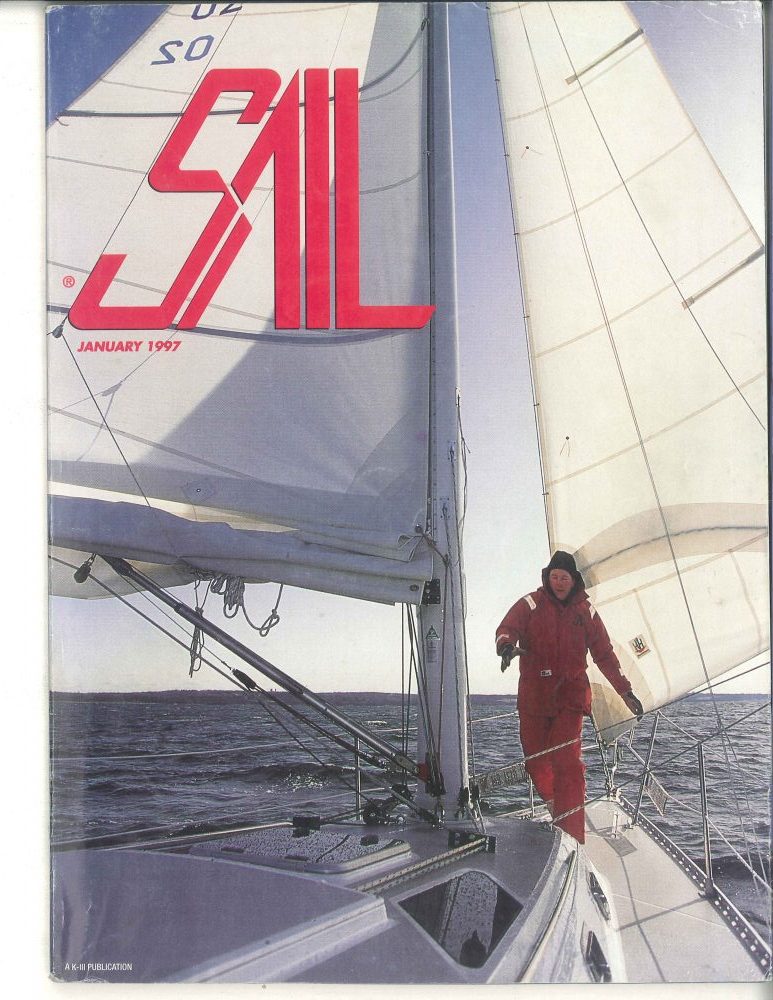 About a year ago, I wrote a three-part story about the life and death of my friend Freeman. The story struck a chord with a lot of you, so in case you missed it the first time around, I’m posting it again. This is the second part. To see the first part, see Return, part 1, in the Blog section of briontoss.com.

He was married to a woman who could be taken as an embodied definition of ebullience. He had two very young daughters, icons of zest and curiosity. He had a job as technical editor at Sail magazine, where he got to study, use, and write about cutting-edge sailing gear, as well as to interact with the amazingly skilled, knowledgeable, and often foolhardy and ego-driven people who used that gear. He had a life, in other words, comprising stability and adventure, romance and pragmatism, poetry and tech-head tinkering.

If this all sounds like a eulogy, it is, at least in part. Freeman died twenty-one years ago, of Lou Gehrig’s Disease (amyotrophic lateral sclerosis, or ALS). As a friend of mine once said, it is hard to imagine a more horrible way to die. Nerve by nerve, your body goes away from you, so that you lose control first of fine motions, then gross, and then ultimately everything, including breathing, and all the while your mind is perfectly fine, utterly aware of the ceaseless erosion of mobility, of expressive ability, of action. If ever there were a test of courage, this is it. Not the kind of courage it takes to run into a burning building, but the kind it takes to hold on to good-heartedness, generosity, optimism, and patience, in the face of an implacable, unbeatable enemy. There are many stories of people who have faced this killer with stalwart grace, including Mr. Gehrig himself, but surely none surpassed Freeman in his final months. I will not even attempt to give you examples; instead, just imagine the most gracious, dynamic, caring, intelligent, and attentive friend you could ever have, and then somehow try to imagine that friend staying that way, while losing everything.

If I believed, as many people seem to, that Heaven were a sure bet, or knew without a doubt that it at least existed, I might be able to manage that kind of nobility. And likewise if I were certain that my last breath will truly be the end of me, I might be able to muster  a moment-by moment appreciation for life. But Freeman had neither of those things. Nor did he have a tepid agnosticism, nor a powerful sense of denial; his fine-grained intellectual honesty precluded that, as well as belief and disbelief, both of which are enemies of exploration; when you think you understand something, you limit what it is. What he had instead was an ongoing quest, and an ongoing delight in the quest.

In short, I never met such a wholly spiritual being who more stoutly refused to acknowledge his spirituality. Which brings me to one of our last conversations. He had long since graduated from walking, to wheelchair, to powered wheelchair, with a little joystick that he could just manage to move with his fingertips. Breathing, for him, was an aerobic activity. We took a stroll down the block and talked of many things. The topic of an afterlife came up, and he promised me that, if there was anything beyond this life, he would do his best to let me know. As I recall, his words were, “I’ll try to make it unmistakable. I’ll lay it on thick, so you’ll know it’s really me.” And then we laughed. A few monthss later he was dead.

Time goes by. Grief turns into fond sadness. And then, one year later, the January 1996 edition of Sail shows up in my mailbox. The photo below is the cover to that issue. It shows Freeman on the deck of a boat at sea. He is walking aft towards the camera, eyes closed, arms raised, and caught in mid-stride, so that he appears to be rising from the deck. He is not hanging on to anything, he is not tethered. Behind him, a reinforcing patch on the jib makes a halo around his head. A serene smile is on his lips. The boat is a Freedom, and it is running wing-and-wing. 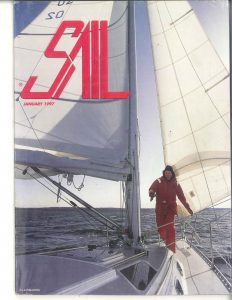