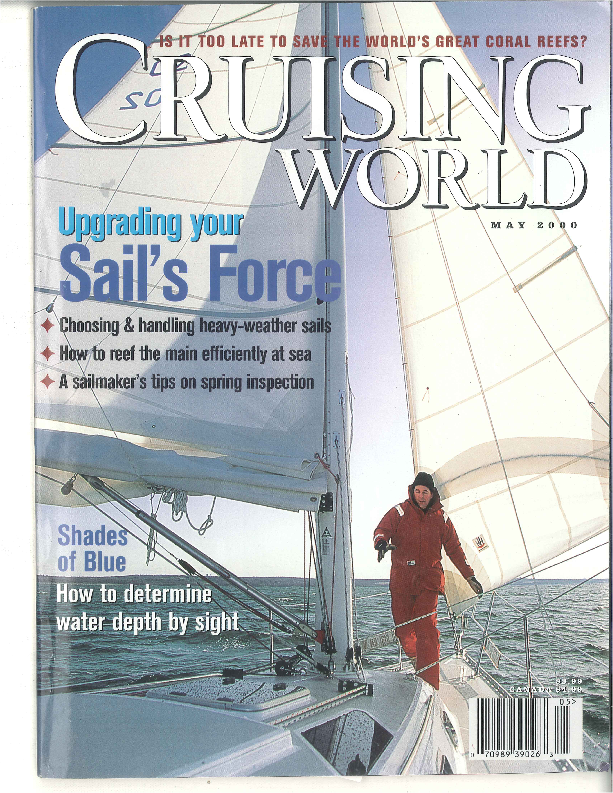 This is the third of three parts. In the first part I tell you about my dear friend Freeman Pittman, about what an extraordinary man he was. In the second part I tell you about his tragic, remarkable death, and a very odd event that followed that death. In this, the last installment, that oddness event gets even odder. This piece won’t make a lot of sense unless you have read the other two. You can find the first one Here, and the second one Here.

I call up the magazine to tell them how much I appreciate this memorial cover, and there is an embarrassed silence at the other end of the line. It turns out that, when they chose a cover, back in those pre-digital days, the art director would place dozens and dozens of candidate slides, submitted by assorted photographers, on a big light-table. Then the art director and chief editor, perhaps with others on the staff, would do a scan of the table, looking for color, composition, tone – just trying to get impressions, looking for something that might click with the coming issue’s content and themes. They’d very quickly and surely winnow most of the slides out, and then take a closer look at the remainder. They might bring out a loupe and check for focus and fine detail. More winnowing. The slide they finally selected worked for everybody. And everyone on the staff  later swore that they had no idea that it was a picture of their Freeman until much later in the process, when the picture was blown up to cover size, and the magazine was going to press. They barely had time to change the “on the cover” insert to identify him.

Okay, okay, seems cosmic, but as Freeman might have said, there were extenuating circumstances. He’d worked closely with these people for years. They knew and loved him. Very possibly they recognized him, on some unconscious level at least, especially for an issue that would come out on the anniversary of his death… Or so one part of my brain contends.

Another part, the inclined-to-cosmic-harmony part, responds, “Oh come on! Eyes closed, as in when they lay you out for the funeral? When was the last time you saw a magazine cover, especially for a vibrant subject like sailing, where someone had their eyes closed? And that halo? The ascension? The smile? “Freedom”, for crying out loud? “

To which the more rational me replies, “Okay, seems compelling, but you can’t ignore our capacity to pick up on extremely subtle cues. I admit that it is an odd photo, but that might be exactly what your unconscious would be drawn to.”

It was hard to argue with the rational explanation. So all of us who knew him tended to gravitate to, well, to a tepid agnosticism on the subject.

Years go by. The editors of Cruising World, Sail’s main competitor, are getting ready to choose a cover. For some reason, a slide from Billy Black, which has been kicking around the office files for years, has made it onto the table. A slide that has already made an appearance on the cover of Cruising World’s main rival. This is a big no-no in the biz, as you might imagine. But there it is, and somehow no one remembers seeing it before, and it is the one they choose, out of all the scores of slides before them. This time they don’t even have time to identify Freeman before the magazine goes to press, because no one at that magazine recognizes him, more than four years after he died. So here comes the May 2000 issue of Cruising World, just in time to commemorate Freeman’s birthday… 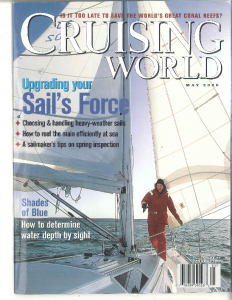 This time the sensible me is having a harder time explaining things. “Now let me get this straight.” it says, “You’re saying that, long before he died, before he even knew he had ALS, Freeman somehow arranged to have a picture taken that, years later, would convince you that there was an afterlife? And then, I don’t know, he hypnotizes two separate editorial teams, years apart, into making him a cover boy?”

At which question my ethereal side pauses for a moment. And then answers, “Yes, pretty much. What if death is not a wall that divides us, but a filter for rules? Where Freeman is, chronology, so essential for us, is not present. And in any event, there the picture is.”

“No,” says the rational self, “No, no, no! The world of sailing magazines is tiny. He was unquestionably a wonderful man. People remember him still. If he was supposed to lay it on thick, why choose magazines run by his friends? He’d have to know that someone like himself would see reasonable alternative explanations.”

“Oh,” says my woo-woo self, “You mean he should have gotten his picture on the cover of Good Housekeeping? Or Esquire? Would you really have been convinced if he had, or would you have found some other way out? Like claiming that those magazines had nothing to do with his life, or his friends, so any appearance there would just be an ALS human-interest story coincidence. He said he’d lay it on thick, and he did. He never claimed that he could satisfy willful skepticism.”

My rational self retires, muttering, to a corner.

More years go by, and more. I have no other miracles to report. I remain steadfastly ambivalent, with part of me thinking that Freeman’s hand in this matter is about as unmistakable as it could be, while another part is  certain that anything short of a full, physical resurrection would not be .sufficient to qualify as miraculous. And even that might not be enough – I’m reminded of the story of the farmer, who, seeing a giraffe for the first time, said, “There ain’t no such animal.”

Which brings me to my last question: What if there is such an animal? What if we assume that my dear departed friend returned, and laid it on thick, to let me know that Death does not claim us? “Wow, thanks Freeman,” says Mr. Rational, “Now we know there’s an afterlife, in which you get to influence magazine cover selection. Great.” Mr. Rational can get sarcastic when things don’t make sense. He wants Meaning and Certainty, not some enigma to confound everything he knows. “What is the point?” he asks. And there really is no answer to that question. Or none that we can make without breaking the rational self into pieces. We need that self, as it is ideally adapted to the logical processes of daily life. I can write this story, and you can read it, because of that self. Freeman made a living with it, and it appears that he used it to present us with the impossible – or, okay, the highly improbable.

Maybe someday I’ll learn to do a better job of reconciling my two inner voices. Maybe there’s a bridge joining the fantastic and the mundane, and my metaphysical and utilitarian selves can learn to meet in its middle. Until then, I miss the man, but not in quite the way that I used to. He is gone, not out, but in. Wherever/whatever he is I love him, and wish him well.