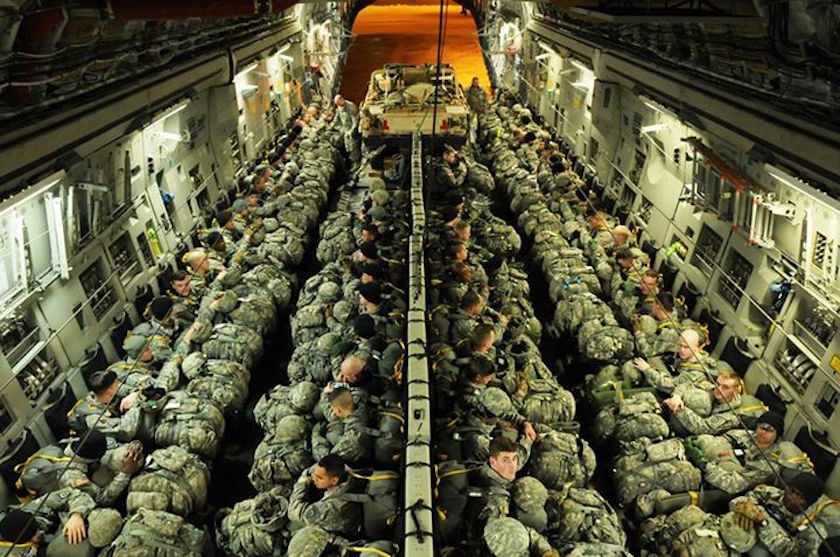 This post will be easier to understand if you read last week’s, but to sum up, two soldiers are tangled up in their parachute rigging, their chutes are collapsed, and they are plummeting to the ground.

The jumpmasters immediately corrected their timing, and everyone else’s chute opened uneventfully. George reached the front of his queue, jumped, and looked down the line of parachutes trailing away below him. He immediately saw the two tangled chutes, and realized that one of them must belong to his friend Maria. As he watched, Bill’s reserve chute blossomed, filled, and collapsed. The pair continued their way-too-fast descent.

George watched all this, helpless. His official task for this jump was to carry the radio for the commander, but as a graduate of a Combat Lifesaver course he also had a medical bag. Medical attention probably wasn’t going to make any difference in this case, but you never know, so he pulled at his chute’s suspension lines to maximize his own descent rate. This is a hazardous move, itself possibly leading to chute collapse, but he had to do something. He could see that the two lieutenants were working at getting separated, but they were trapped by their lines. As they neared the ground, when all seemed lost, George saw Maria’s reserve chute open – and stay open.

It was an indescribably sweet sight, and the descent of the two soldiers slowed to a survivable rate. Note: a reserve parachute is much smaller, and much less aerodynamically effective than the primary chute. At the time of this jump, the reserve was 28sq. ft, and basically a very thin disc, while the primary was 34sq ft, with a deep parabolic shape. The difference in size and shape meant that, if you had to use the reserve, you would come down faster, and with less control. Having to bear the weight of two people made things even worse, but it was better than nothing. Maria played her control lines, working to keep the canopy open as it was battered by the still-fluttering mess of the three other parachutes.

It looked to George as though everything was going to be okay, but when the pair was still about 200 ft above the ground that last, precious reserve chute collapsed.

In normal circumstances a parachutist, using the equipment that was Army standard at the time, would hit the ground at about 15 mph, or 22 ft/sec. This is about as fast as you’d be going if you jumped off the top of a minivan. With a crosswind it can be more like running off the top of a van, but we’re still talking relatively low velocity. If a skydiver jumps out of an airplane, by the time they freefall 200 ft, they will be travelling at about 60 mph, or 88 ft/sec, about like a freefall off a 20-story building. It is just barely conceivable that a human being could survive an impact at that speed, but given the drag from all those flapping parachutes, and/or the possibility that the reserve collapsed at less than 200 ft, the soldiers might have  augered in at as little as 40 to 50 mph. Which would be like jumping off a building of merely 6 or 7 stories.

By any normal standards, this is still a guaranteed-fatal velocity, but Bill and Maria had two more factors on their side. One was that they were young and extraordinarily tough people; there are no couch potatoes in Airborne. The other factor is a crucial determinant of outcome for almost any jump, something almost as important as the parachute itself: the Prepare to Land Attitude.

When you are properly in the Attitude, your knees are slightly bent, your feet and knees are pressed together, your back is straight, your chin is tucked, your elbows are close to your side, and your hands are up, to protect your face. There is also a dynamic aspect to the Attitude. If you are coming in at any speed at all, you need to take a shoulder roll, to bleed off the force of the landing impact. A face plant does not accomplish this, nor does falling onto your back. Instead, you need to twist your body to one side as you are about to land, and roll onto the other side, progressively making contact with feet, calves, thighs, butt, and lats. This twist-and-roll is particularly valuable when, as is often the case in the military, you are landing in a breeze and/or swinging in a pendulum arc, but it is also a vital technique if you are coming down extra-fast.

As Bill and Maria neared the ground, observers there saw that Bill’s knees were locked back, and that his legs were apart. Maria, by contrast, was holding a textbook example of Attitude.

George watched as Maria hit, rolled several times, and then lay completely still. He feared the worst, but then she took a deep breath and shouted, “Mother—- that hurts!”. It turns out that she had severely sprained an ankle, suffered two hairline vertebrae fractures and some bruised ribs, but was otherwise okay. Bill did not fare nearly so well: six spiral fractures from knee to ankle on one leg; one break on the other; multiple broken ribs; several fractured vertebrae; concussion. The Attitude makes a difference.

One more note on procedure. A jump like this one typically takes 40 to 45 seconds. George came down as fast as he could, so his time in the air was almost certainly less than 40 seconds. But by the time he landed and went to help, an ambulance had rolled up, and medics were tending to the wounded. Just as the manual says they should.

There are any number of morals that might be appended to this story, things like Teamwork is Powerful, or Never Give Up, or Airborne is Awesome. But the one I like is both figuratively and literally apt. It comes from Archilocus, a soldier and poet of ancient Greece. He wrote that, “We do not rise to the level of our expectations. We fall to the level of our training.”

Next week, the Commodore and the Vigilant