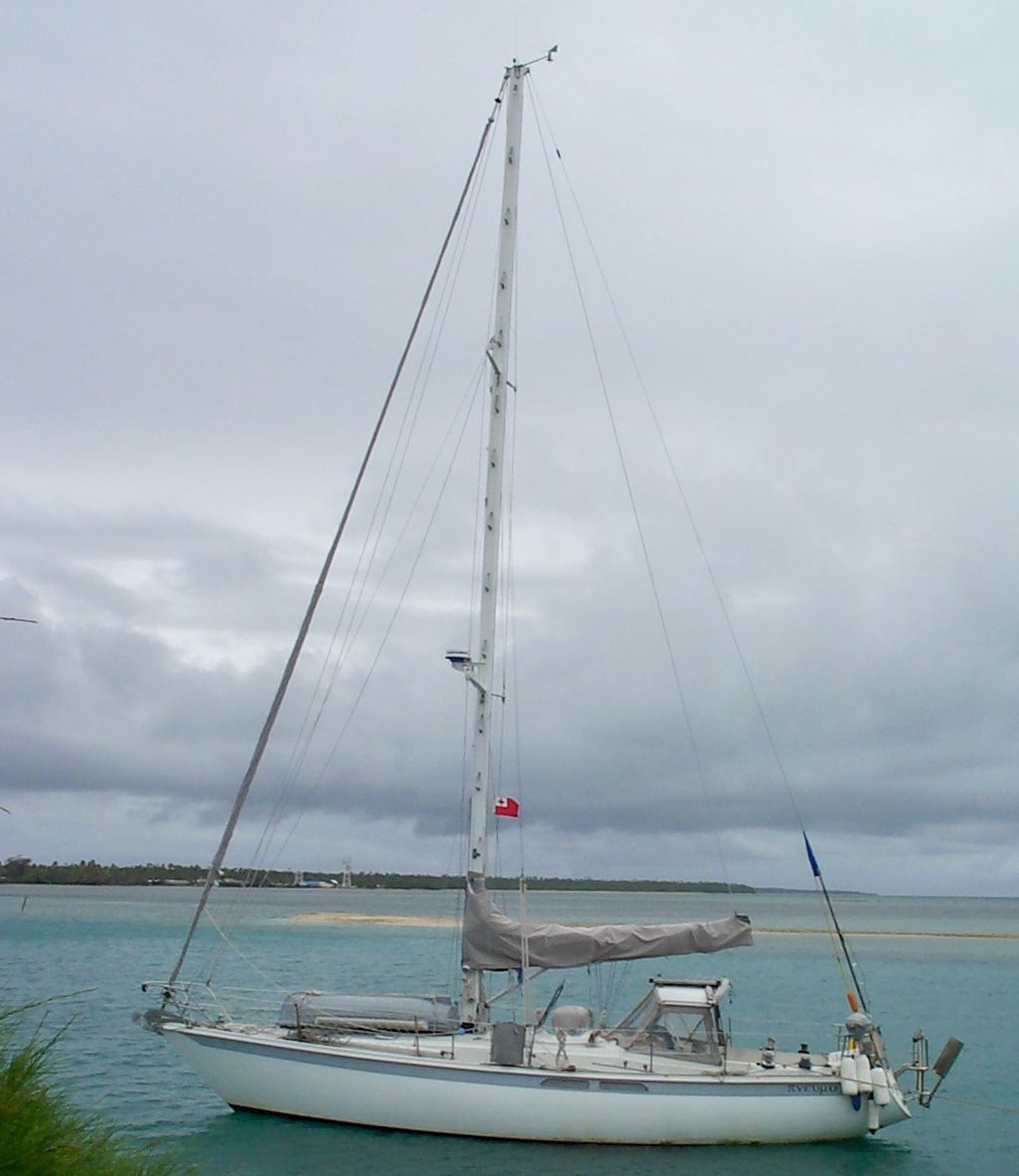 My friends Melissa and Guy Stevens were somewhere in the middle of the Pacific Ocean, in their sloop Pneuma, when they discovered that they couldn’t lower their Genoa. They wanted to get it down for a bit of repair, but the halyard swivel on their Genoa furler kept hitting an obstruction, and wouldn’t slide down the foil. For all you non-sailors, the Genoa is the big sail at the front of the boat, and the furler is like a huge roll-up windowblind. The one one Pneuma was about fifty feet long.

The stuck furler didn’t make for an emergency, because conditions were about as calm and unthreatening as they could possibly be, with absolutely no wind, and a sea so calm and flat that it scarcely seemed a sea at all. Ordinarily, going aloft anywhere but in a marina is something to be avoided, at least in small craft, but in this case it made perfect sense for Guy to get his climbing harness on, and get up there to see what the problem was.

The furler was a Profurl, and it quickly became evident that the problem was a fairly common one, specific to this brand. Every furler brand has its quirks, and one of Profurl’s is that the foil sections are held together by machine screws that are coated, at the factory, with a threadlocker (Loctite is the best know type of threadlocker).

This threadlocker for this brand is on the screws,  is dry when you get the furler kit, and is activated once you screw thread the screws into the foils. Or that’s the way it is supposed to work; there seems to be more threadlocker on some kits’ screws than others. And maybe sometimes the formulation isn’t quite right, or the stuff is old, so it won’t stick as well as it should. In any event, while the screws in most Profurls stay obediently in place, you occasionally hear about situations like this one, where the sail can’t be lowered because, in the course of sailing, the foil has rattled and twisted, the screws have backed out, and their heads are now projecting past the surface. The swivel, which goes up and down with the sail, fits closely around the foil; this one couldn’t get past the loosened screws.

Some sailors, either because it’s an emergency or because it’s just how they do things, have forced the sail down when confronted with this problem, hauling mightily on the luff of the sail. This can work, if the crewmembers are heavy and/or panicked enough, as the halyard swivel has a plastic inner lining. So with sufficient force you can make the screw head(s) carve channels up the inside of the lining, which of course damages said lining, and does nothing to address the root cause of the problem, so the screws can continue to work their way out, making it even harder to raise or lower the sail next time, as well as gouging even deeper channels.

Since most roller-furler jibs get left on the stay for years at a time, it sometimes happens that, especially on long voyages, the screws can fall completely out of the foil, with no one the wiser, which means that the foil sections are no longer held together, which means that, depending on the quality of the installation, they can drift apart to varying degrees. The most common consequence of this is that a bight of the sail’s luff herniates out between sections, making it impossible to lower the sail. There are other possible consequences, but thinking about them just depresses me, so I’ll leave them to your imagination. The short form is that you don’t want those screws to back out, which is why Harken, for instance has you pretty much cover all parts in 5200 adhesive that they don’t bathe in red Loctite, and why Schaefer, to take another example, puts their units together with stainless rivets.

Oh, and a perverse alternative Profurl scenario involves the fact that thread-locking adhesives also function, to a certain extent, to isolate dissimilar metals. So if the insufficiently-coated screws don’t back out, that just means they will stay in place, becoming one with the adjacent aluminum through the wonders of galvanic action, until not only will they not back out if you should want them to; you’ll be tempted to use explosive devices to budge them, should you ever need to disassemble the foil for repair. What typically happens in this case, if explosives aren’t handy, is that first you’ll strip out a couple of screw heads trying to remove them, then progress through penetrating oil, impact driver, easy-outs, heat, cursing, and utter despair, at which point you will pause to regroup, then attack anew with a sharp drill bit. This will remove the screw, but will also almost certainly chowder the threads on the (expensive, impossible-to-find-in-the-remote-port-you-are-doing-this-repair-in) aluminum bearing holder that the screws are tapped into, and very likely also chowder the holes in the foil itself. In addition, you are liable to discover, once you slide the ruined bearing holder out of the foil, that though the heat you applied earlier might not have loosened the screws, it did manage to turn the equally hard-to-find internal plastic bearings to slag.

Well, Melissa and Guy are not the sort of people to let teensy screws get away with things like the above, which is why Guy was up there on that flat calm day. He first detached the head of the sail from the swivel, so that Melissa could gather the sail in on deck. Then he got to work with a little baggy of spare teensy screws (they are easy to drop, so bring spares), a screwdriver (on a lanyard, of course), and some fresh Loctite. He was up on two halyards (a primary and a safety), plus he had an approximately 2’ tether looped around the stay to hold him close enough to the foil to do the work. He made his way down, section by section, removing screws, coating them with Loctite, and putting them back in.

All went well until he was about halfway down, at which point Melissa called up to him.

“Swell!”, said Melissa, and pointed off to one side.

Guy looked, and saw the glassy, otherwise utterly flat and featureless surface of the ocean broken by a single, large, rapidly moving swell. It was coming from directly abeam. “Hold on!” shouted Melissa. Unfortunately the only thing available to hold onto was the foil, a device designed to rotate under load. As the swell reached Pneuma, a series of intimately linked, harmonic mathematical elements were put into action. The speed, height, and steepness of the swell, Guy’s mass, his position relative to the boat’s axis of rotation and center of gravity, the length of exposed halyard, the boats’ lateral roll period, and the length of the tether, all came into perfect alignment, such that as the boat rocked, it swung Guy forcefully, unstoppably around the stay. Fast. Because the stay was angled, it meant that he was swung forward and up, with an apogee in front of the stay, and higher than the starting point. Which meant that there was now an opportunity for gravity to accelerate the second half of the rotation. As an engineer I know put it, Guy “achieved resonance.” Aided by the continued, wonderfully complementary continuing gyration of the boat, he was swung around again. And again. And again, faster and faster, as the halyards spiraled around the foil, shortening as they went, until there was no slack left, and Guy came to a very abrupt stop with his face mashed against the foil.

At this point, as often happens in times of stress, he was able to be aware of several things at once; the impact of the foil, the warmth of the sun, the color of the sky, and of course the sound of Melissa falling down laughing at the sight of him pulling a stunt worthy of Buster Keaton. But in almost the same instant he was also aware that the boat’s ongoing motion was causing him to unwind, about as forcefully as he had wound. All the requisite inertial and geometric properties remained in utter accord, and he orbited the stay, slower and slower, until he was back where he had started, and then continued to wind up in the other direction, faster and faster, once again fetching up abruptly. This went on several more times, we’re not sure how many, as Guy was kind of occupied with the whole acrobatic thing, and Melissa was pounding one hand on the deck and laughing so hard she was having trouble breathing, let alone counting.

Eventually, long after the swell had gone by, the boat stopped rocking, and Guy stopped spinning. Melissa kept laughing, but she was able to tend him on the halyards as, bruised but unbowed, he finished the job.

Got a Profurl? Fine furlers, very reliable. But you might want to check those screws.

For more on Melissa and Guy’s adventures, and a lot of valuable advice, visit realworldcruising.com.