Posted in Adventures in Maintenance, and Uncategorized

In Ross Norgrove’s classic book Cruising Rigs and Rigging, he tells the tale of the crew of a trading ketch in New Zealand, long ago. The skipper and mate took the train out of town to visit their farmstead for the day, leaving the crew to end-for-end all the halyards and sheets. Not a horrible job, but a slow one, involving unreeving, reversing, and rereeving, then cutting off the old splices, whipping those ends, and then putting new splices into the other ends. It was a small port town, and they were tied right up to the shore, and right across the train tracks was a pub. When it opened for business, someone got the idea of dragging the ends of the lines over there to work on, leaving the blocks attached to the boat.

All went wonderfully well, with locals buying them beer, the crew reciprocating in kind, with a helping of sea stories to entertain everyone. At the end of the delirious day, just as the sailors were preparing to drag their work back to the boat, the bartender announced there’d be a farewell round of drinks, on the house. They were just setting down to enjoy this unexpected parting gift when the train carrying the skipper and mate came back to town, and severed every single line.

We sent a new hire aloft to “slush” some standing rigging. Slush is a mixture of tar and/or paint and/or fish oil and/or Marvel Mystery Oil and/or pretty much whatever gummy, stinky liquid that a rigging shop might decide should be painted onto served rigging, to act as a preservative. No matter what is in it, slush is an awful, viscous mess until it cures, and riggers are expected to apply it while hanging above pristine yacht decks. There are ways to minimize the likelihood of spatter, but there are even more ways to spatter, with no shortage of stories about teak, canvas, and humans doused by what amounts to aromatic indelible ink.

So when we sent our apprentice up, we made it clear that the slush must not be spilled. Not one drop, we said. And up she went and immediately tipped the bucket into her lap. The rest of us were attending to matters below, and didn’t hear her gasp of anguish, and didn’t see her desperately trying to squeegee the goo back into the bucket. Nor did we see how, once it was clear that only a limited amount was going to be recoverable, she began to distribute it into her clothing, and into the fabric of the bosun’s chair, in an attempt to prevent drips. She succeeded at this, and spent the next couple of hours slushing the rigging by extracting tar from herself as well as the bucket. When she got back to deck, gloriously stained, we asked her why she hadn’t just come down right away. She said she it was partly because she was embarrassed, but mostly because she thought I would let her go if she didn’t get the job done. She really, really wanted to be a rigger. And she turned out to be a great one. To this day I am sure, when she is around, that I detect of whiff of pine tar.

A topmast was going up on a big schooner. This job is accomplished using a heelrope, which is rove through the bottom of the mast, up to the lower mast cap. The mast is hoisted aloft on the heelrope, and threaded up through a pair of “doublings,” basically a couple of brackets to secure the bottom of the topmast to the top of the lower mast. The arrangement looks like this model when it is in it doublings:

The lower doubling is rectangular, at the height of the crosstrees. The upper doubling is seated, at its aft end, onto the lower mast cap. It has a round hole in its forward end. The topmast goes up through both holes.

The rigging has to be put on after the top of the mast has cleared the upper doubling. You basically thread this tree-size spar through the doublings, and pause with the head of the topmast just above the lower mast cap. Then you slip all the gear on, and when you are done you send it the rest of the way up. 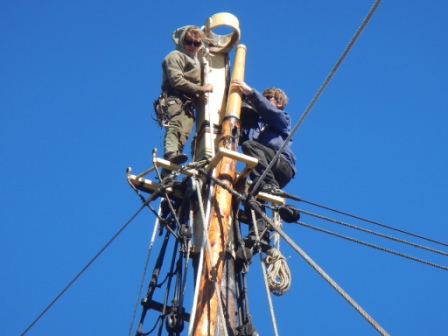 This can be an awkward process, because if you are standing on the crosstrees – the logical place – the top of the topmast might be well above your head, and you have to strain to get the (heavy) rigging up and over the topmast’s top. You can also sit on the lower mast’s cap, but this is awkward, too. So on this schooner the mate decided he would stand on the cap, and work from there. This is crazy, but not altogether unheard of. True, he was over eighty feet above deck, perched on something the size of a large dinner plate, but on the other hand he had several feet of topmast right in front of him, providing a stout and secure handhold. So he proceeded, hanging shrouds and stays and blocks. He was almost done when the heelrope broke.

The topmast immediately plummeted to – and then through – the deck, shedding all that rigging as it went, leaving the mate, as he put it, “Holding air.” He stood there for a moment, and then somehow, with extraordinary care and agility, he got himself down off that dinner plate. He has been a fan of carefully-inspected heelropes, plus backup heelropes, ever since.

Many years ago, some New Zealanders sailed into Port Townsend, and came to visit Hasse’s sail loft. They proved to be knowledgeable voyagers, full of useful information, even though their accent was a bit opaque to local ears. One of their suggestions was for a brand of soap that they had found to be excellent for getting stains out of Dacron sails. The sailmakers thought this was great, and one of them asked the Kiwis if the soap was good for anything else.

There was a moment of stunned silence, and then everyone except the puzzled visitors fell to the floor laughing. When they finally got their breath, they explained the misunderstanding, at which point the other Kiwi carefully said, “Oh, no, we mean it is really good on wood.” At which point everyone fell down laughing, again. Two nations, divided by a common language.

Do you have an Adventure in Maintenance story that the world needs to hear? Send it in, and I will find a home for it in a future post. Write to btoss@me.com. If I feel the need to edit it, I will run any changes by you before posting.

If you are enjoying the content here, consider signing up to get email notifications of new posts. See below for details.