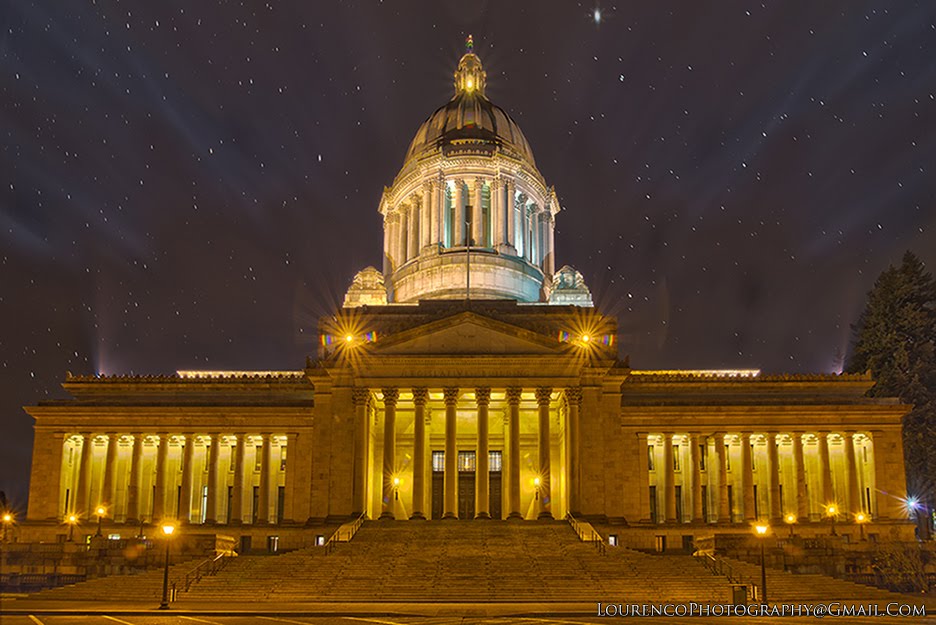 A friend of mine is a shipwright and carpenter, so he is frequently involved with old construction as well as new, afloat and ashore. While he’ll allow that his predecessors did a lot of fine things, he’s also dismayed by the amount of shoddy work he finds.

“People talk about how the Old Ways were better, how we don’t know how to build right any more, how we don’t have any skills,” he says,”but when I’ve torn apart some of these old buildings and boats, I find that parts of them were just slammed together, and the only reason that they lasted as long as they did is that they had really big, amazingly clear, tight-grained wood, and that they used a lot of nails.”

I thought about this one day when I was in the office of Washington State’s governor. The governor wasn’t in; I was there to install the last of many backup suspension cables for the chandeliers that festoon the Capitol building. We got the job as part of the team that was repairing and upgrading the structure after an earthquake. We used Vectran, sized to the fixture at hand (the chandeliers ranged in weight from about 40 lbs to about 9 tons), to provide a backup to the chain that was the primary suspension method.

This building was finished in 1928, and has held together pretty well. It is from the Massive Pile of Stone school of architecture, a classic megalith of a thing, with a multistory wing on either side of a dome that is over 200 feet high. An entrance stairway as wide as a river delta leads up to giraffe-accessible bronze doors, and just about every interior surface is plated with marble, artfully cut and fitted, on a correspondingly large scale. It’s an amazing place, full of the kind of attention to detail that exemplifies old-school artisanship. But it is also possessed of some truly execrable, what-were-they-thinking-of construction, the kinds of details that make one wonder what else is whacko.

For instance, the priceless chandeliers that hang above all of the interior walkways are held up by chain that was formed by just butting the ends of the links together — no welding involved. And not just butted together, but butted at the narrow end of the link, so the load tends to wedge the ends apart. Which is precisely what happened; one of these chandeliers fell down in the earthquake, and another two crashed to the floor before we could get our safety lines on. There were noticeable gaps in the links of many of the fixtures we worked on, indicating that they were not far from failing, which to us meant that our backup suspension was more like a secondary primary suspension, if you know what I mean.

Anyway, I don’t mean for this to be only a let’s-slam-those-old-guys essay; while it is true that you can see lots other bad examples in that old building, they are often right next to works of incredible artisanship. At the Capitol, any time we would walk  into a room we would be likely to find some masons or carpenters or painters there, shaking their heads. Sometimes they’d be shaking their heads in exasperation, sometimes in amazement. They might be marveling at a multi-compound-cut corner piece, or an expanse of trompe l’oeil, or they might be looking at some awkward wudge of bricks and mortar that had been hidden behind artful trim. The thing is, all of this work has held together for 90 years, which is a whole lot longer than many of today’s buildings can hope for. Mass, materials quality, and sound overall design were all on the side of the Old Ones, so they could afford to be rough in the details that didn’t show, but even the rough bits were as a rule not shoddy.

Anyway, a theme emerges as one examines the work: in matters of out-and-out artisanship, the kind of skilled fabrication that is utterly dependent on the talent and conscientiousness of the artisan, those builders set the bar extremely high, and you could see their successors, ostensibly on site to repair or prevent temblor damage, recalibrating their own standards, their own aspirations, their own idea of what “done right” means.

The art of building, compromised though it may have been in some ways by greed, a lessening of emphasis on beauty-for-its-own-sake, and, yes, the unavailability of once-common grades and dimensions of materials, has not simply decayed over the years. Far from it. Builders nowadays may be driven too often to put up disposable — and ugly — buildings, but the wiring in those buildings is far less likely to kill their inhabitants than in the Old Days. Likewise the plumbing is likely to work more reliable, with less waste, and the structure is less likely to fall down in an earthquake. And some of the things we construct today would have stupefied our predecessors. We do more with less, we engineer it better, and sometimes we even make it beautiful and durable. Rather than abandoning the skill- and beauty-oriented virtues of the Old Ways, we embrace them, aspire to them, manifest them.

My hope is that, if our predecessors could see some of our work, they would be shaking their heads in awe and admiration at some of the buildings and boats that we are putting together today. I hope they would say something like, “They don’t have much to work with, but they sure make the best of it.” That would make a good slogan for the New Ways.