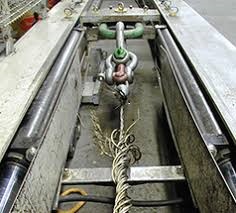 Last week’s rigging puzzle was about breaking stuff. Here is how it went:

The manufacturers of a new type of wire rope terminal conducted a destruction test. This test resulted in the sample of wire rope breaking at exactly 10,000 lbs. The wire broke right next to one of the terminals. The rated strength of the wire rope was also 10,000 lbs.

“That’s great!” said the manufacturer, “This means that our new terminals are 100% efficient!”

“Probably not,” said the testing machine operator. “It is much more likely that those terminals weakened the wire, maybe by as much as 15 or 20%.

The testing machine was calibrated correctly. Why did the operator think that the terminals weakened the wire?

This is an obscure one, so here is what I hope is a large hint: wire rope must meet, within very narrow tolerances, a minimum breaking strength, or it cannot be sold. Bonus points if you can tell what detail in my description of the test might have made the technician skeptical.

The solution lies in the term “rated strength.” By international standards, average strengths, as tested to destruction, must be not more than 2.5% weaker than the published rated strength (more on this later). Since break strengths can vary significantly from batch to batch, manufacturers will see to it that their wires are significantly stronger than the official requirement, sometimes by as much as 20%.

So when the tests on the new terminal were right at the official strength, the technician was suspicious; if the terminal really was 100% efficient, one would expect the samples to break well above the rated strength.

The puzzle’s bonus points answer was the fact that the wires broke right at the terminal. This usually only happens when the terminal creates a stress riser, weakening the wire so that it breaks adjacent to that stress riser – the terminal itself. With a truly efficient terminal,  the wire might be expected to break at least 2.5” away from the terminal, or “in the clear.” Where the wire broke confirmed the technician’s suspicions.

This puzzle has real-world significance. For instance, Norseman terminals were for years touted as being at or near 100% efficient, based on tests just like the above. But when the actual strength of the wire was known, they struggled to achieve, you guessed it, 80% efficiency. Happily, those terminals are no longer being made.

If you would like to see some destruction test results for sailboat terminals, based on actual wire strength, I can recommend the tests carried out by yours truly for Practical Sailor. The article is for subscribers only, but it is worth the subscription fee, and not just for that one article. Sign up here: https://www.practical-sailor.com/

For those of you who would like a more technical description of terminal efficiency, you might enjoy this information-dense entry by longtime reader and entrant Mike Madden:

If the manufacturer breaks x samples of his new wire rope, the result must surely be x different breaking strength values normally distributed (probably) about a mean . However, the minimum accepted strength can only be 2 1/2% lower than the published nominal breaking strength*. That is 2 standard deviations (SD) below the mean breaking strength of the wire rope. Since 6 SDs includes 99.9% of values, that suggests that the highest breaking strength found during testing would be about 5 SD above the published minimum. I couldn’t find any wire rope breaking strength data that included Sds, but in a thread in a Sailing Anarchy forum, a test of Dyneema break strength test found that the SD of the sample breaks was 3%. Using that value, 3% of 10000 llb is 300 lb, so 5 SD above 10000 lb would be 11500 lb. Whew!

Anyway, given that series of guesstimates, 10000 lb is 15% lower than the tested maximum breaking strength of the wire, which is what the testing machine said. Since break tests for wire rope are only valid if the break occurs 2 or more inches from from the ends, and this break occurred at the terminal, the testing operator suspects the terminal as the cause of the failure.

We got some splendid entries to this week’s puzzle, and most of you got the basic answer and the bonus question. But there can only be one winner, chosen at random from the pool of correct entries, and this week that winner was … Tim Omlor! Congratulations, Tim, you have just won my new E-Book, Falling, a series of essays on the topic of, well, falling. We are in the final stages of editing, but I hope it will be ready to send in less than a month. Be in touch to remind me, please.

If the rest of you are interested Falling, we will be posting a pre-order opportunity in the near future. Stand by.

Meanwhile, if you enjoyed this puzzle, you might enjoy all the other ones we’ve posted, and maybe even the now-considerable number of essays that have accumulated on my blog. To find and binge-read, see: Our Blog

As always, I recommend that you visit our splendid Online Store, for the best in rigging services, tools, materials, and educational opportunities.

If you are reading this on Wednesday morning, it is because you are a subscriber to this blog, and you get to see it a day ahead of everyone else. If you are not yet a subscriber, consider scrolling to the bottom of this page, and signing up. It’s free.