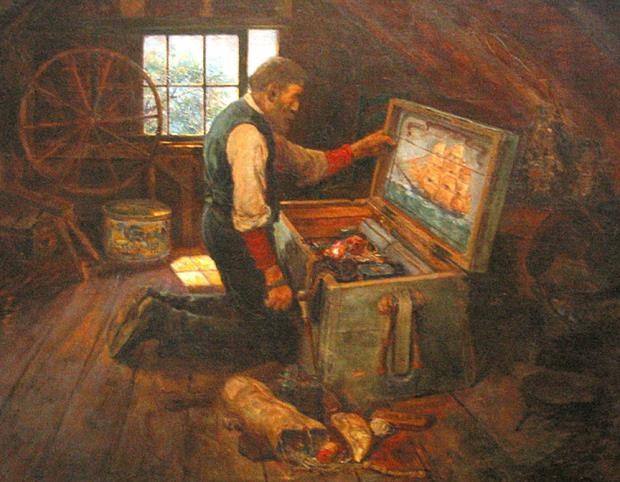 Posted in Ashley, Knots, and Rigging

In the middle of WWII, Clifford Ashley traveled from his home near New Bedford, Mass. to New York City. He took with him a sizable manuscript, which in addition to text comprised about 7,000 drawings describing 3,854 knots. He presented this unlikely assemblage to a substitute editor at Doubleday and Co. (his boss was away in the Army). This editor happened to be something of a knot enthusiast, something of a sailor, and a world-class sucker for absurdly unlikely book projects.
All three qualities were, I think, essential for him to say, “Yes, we will publish this.” He might have been influenced by the modest success of The Encyclopedia of Knots and Fancy Ropework, published a few years earlier, but that book, which manages somehow to be both harsh and murky, stands in sharp contrast to Ashley’s effort, which is a marvel of warmth, lucidity, and thoroughgoing scholarship. In any event, production was under way and the presses were running when the chief editor returned from the war. “You did WHAT?” he said. “You published a book of 3,854 KNOTS!?! Who is ever going to read that?” Somewhat in desperation, the art department chose, for the dust jacket, a picture of some kind of faux yachty in a captain’s cap, holding up a Tom Fool’s Knot. Mr. Ashley, a student of Howard Pyle, was one of the country’s premier artists at the time. His book is literally full of his wonderful illustrations. Aargh.
You can imagine the editor’s surprise when the first printing instantly sold out. As did the next, and the next…
Fast forward 70-some years. We are at the annual meeting of the International Guild of Knot Tyers (IGKT), held this year at the New Bedford Whaling Museum. The Guild chose the location because the museum has mounted a major exhibit, “Thou Shalt Knot,” about Mr. Ashley’s unlikely book, still in print after all these decades. The Guild probably wouldn’t exist without the Ashley Book of Knots (ABK), any more than country music would exist without Hank Williams, or martial arts movies without Bruce Lee. Oh, we’d have something in those categories, but they — and many others — cohered around a compelling, genre-defining individual. Clifford Ashley is the Elvis/Jesus/Hemingway/Kurosawa of Knots.
Yes, I have just revealed myself as a hopeless knot geek, an ABK acolyte. My tattered copy was a Christmas present from my family in 1969. I once traveled to England to participate in an IGKT event at which we displayed every knot in the ABK — and hundreds of others developed after its publication. I have a pile of back issues of “Knotting Matters,” the Guild’s quirky newsletter. So I am one of the devotees shuffling reverently past the museum’s exhibits. There are sinnets he made for chapter 39, buttons for chapters 9 and 10, a priest cord from chapter 30. Here is the actual pilot’s ladder that served as a model for Figure 3841, and the needle case that showed up as figure 3544, plus tools, chest beckets, cats-o-nine-tails, and scores of other artifacts, either from Ashley’s collection, or from those of the generations of knot tyers he inspired. Utter heaven.
There are also lectures, in an adjacent auditorium, on Ashley’s influence on literature and science, and his place in the context of works that preceded and followed his. In a central space, Guild members exhibit samples of their own creations, everything from belts to bellropes, from Turk’s Heads to lanyards to mats. Wandering through it all, usually trailed by a cloud of admirers, is Des Pawson, M.B.E., our own Gandalf of Knots, who co-founded the Guild, has produced numerous books and monographs on knotting, and who gave the keynote address at the event.
But as big a presence as Des was, I think he would happily acknowledge that he was put into the shade by the quiet, diminutive Phoebe Ashley, who greeted everyone with utter graciousness, sat through every lecture, admired every exhibit, and in general displayed a charm and genuine kindness and attentiveness that did her father proud. Our own Queen Elizabeth II of Knots.

To find out more about Ashley and his influence on rigging — and much more — you might want to see This Post.

The Ashley Book of Knots can be found in any bookstore worthy of the name, and it has recently been made available as a Free PDF Download.