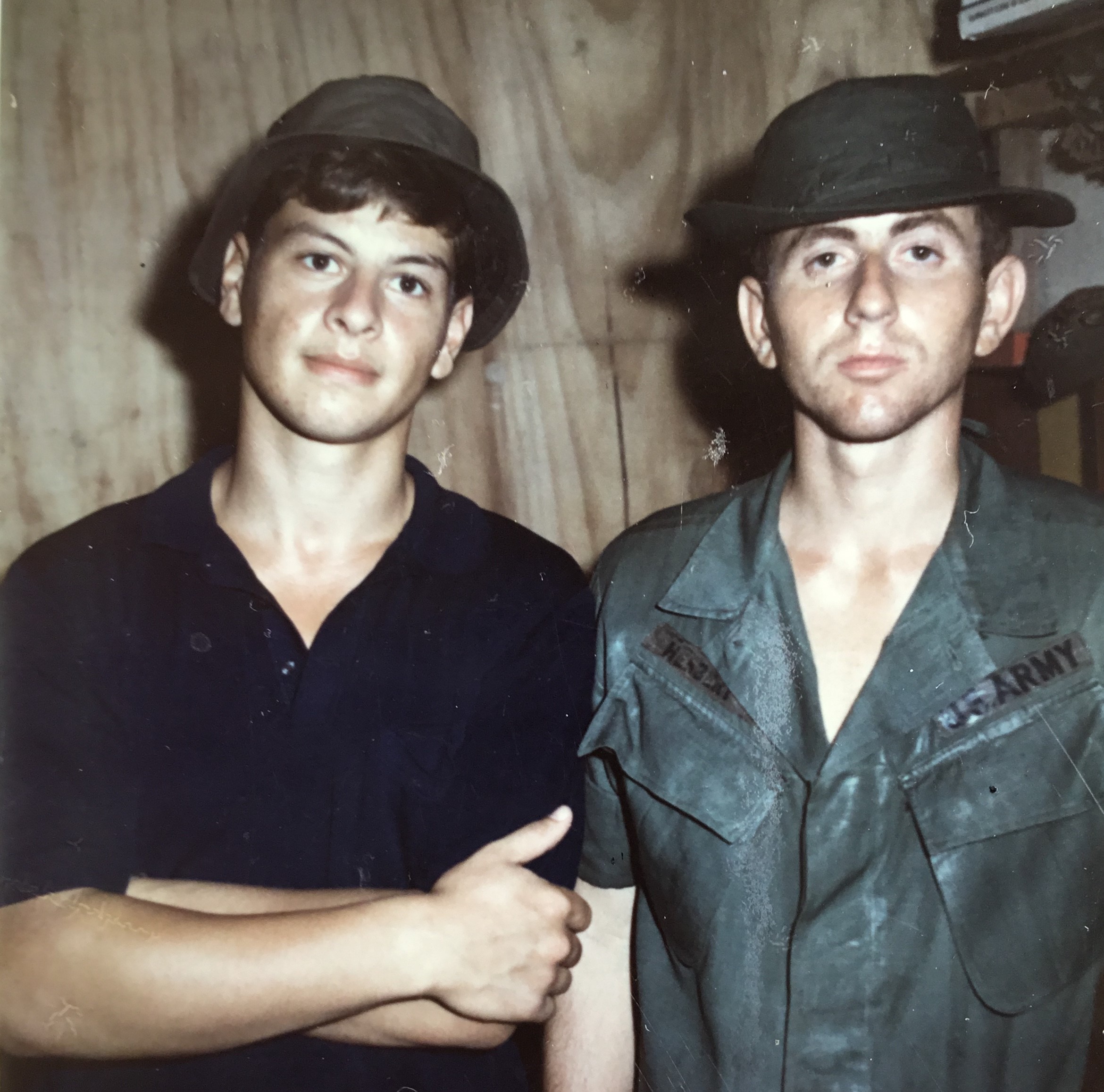 Mark in the Army

He was not after a career in the army. He enlisted instead of being drafted, as did most of the soldiers in that war. He was idealistic and gung ho, but he also knew that by enlisting he’d get better educational options. This habit of earnestness and pragmatism is still with him. He signed up for clerk-typist school, then went on to Airborne, the second step on his chosen path. If he had completed training there, he was planning to take the steps to become a Green Beret, largely, he said, because of the training in languages and medicine he would get. We joked with him about this, saying that when he was done with all his classes he would be able to parachute behind enemy lines to perform surgery on a French typewriter. He laughed, a little.

But on his 3rd jump for the 82nd he injured his hip, and after his 5th jump it was clear that the injury wasn’t a slight one, so the Army put him into the typing pool at Fort Benning, and after a while they sent him to Vietnam. There he was put into a holding company, which is where they would they keep newcomers until they found a place for them walking point somewhere. But the clerk who interviewed him looked at his papers, and said, “Can you type?” Mark ripped through an exam at 60 words per minute, clear text on five carbon copies with a manual typewriter, and the next thing you know he’s interviewing newcomers at 2 Field Force, command center for 3-Corps, in the southern part of the country.

In 1969, when Mark enlisted, Neil Armstrong walked on the moon, the Jumbo Jet made its debut, the Beatles gave their last live show, Charles Manson killed people, Woodstock inspired and entertained people, and 11,616 U.S. service members died in action. This last is of course an appalling number, but it was actually almost 3,000 fewer than the year before. The war was beginning to wind down.

Things were more intense in 1970, when he arrived in Vietnam. On the one hand, the Beatles broke up, Joplin died, Hendrix died, perhaps not coincidentally heavy metal was born, and the Ford Pinto made its fiery debut. On the other hand Apollo 13 managed to get home safely, the world celebrated the first Earth Day, the Nuclear Non-Proliferation Treaty was signed, the Azwan High Dam was completed, cigarettes were banned from U.S. television, and Muhammed Ali knocked out Jerry Quarry. But to return to the first hand, Nixon ordered the invasion of Cambodia, protests against the war turned violent in the U.S., a Communist peace treaty delegation rejected Nixon’s October 7 peace proposal as “a maneuver to deceive world opinion,” and another 6,081 U.S. troops died. As in every year of the war, many more soldiers were grievously injured than killed, and many, many more civilians were injured or killed than soldiers. On the whole it was a lousy year, though perhaps my recollection is colored by the fact that my brother suffered a freak gunshot wound in late April. More on that later. Meanwhile, let me tell you about his job.

Imagine that you are a clerk, riding in a helicopter. You can hear bullets spanging off the armored bottom of the helicopter, because you need to visit the firebases out in the countryside. In the process, you must fly over many, many hostile people armed with AK-47’s. In this war, no soldiers really qualify as REMF’s (rear-echelon-you-can-fill-in-the-rest), because there is nothing remotely like a secure rear echelon here. Every base in the country is subject to various forms of attack at any time, from harassing fire to full-on assaults. Even social clubs in Saigon got bombed if GI’s are known to frequent them.

So Mark was a clerk, but he spent a good deal of time under fire. The reason Mark needed to visit all those fire bases is that his job was to count bodies, living and dead. He and maybe another dozen clerks like him had to track how many soldiers were supposed to be in each unit, how many were on leave, how many had rotated out, how many had been sidelined by injuries, how many of those were likely to return to duty, and of course how many had been killed. With the data he collected, the Army decided how many people to send where.

Mark did not know what difficulties were ahead of him when he arrived. He considered himself extremely lucky to be in a place with tennis courts, a swimming pool, and other amenities. Those amenties were there in part because field troops would rotate through the base for 13-day leaves, so he saw a steady parade of Aussies, Koreans, and assorted VIP’s, as well as G.I.’s. It was an interesting place to be. Then, three weeks in, he got shot.

Here is how it happened. He was asleep in a top bunk of his hooch (hut). A friend was reading in the bunk below. Somewhere outside someone – could have been friend, could have been foe – fired off a 7.62mm heavy machine gun round. It arced in through the roof of the hooch, burrowed laterally into his left latissimus, and came to a stop less than an inch short of his spine. He stirred, but did not wake. A little later another friend passed by, and noticed that there was a lot of blood on the mattress. At first they all thought it was a rat bite – there were a lot of those – but a medic said, “I know this will sound crazy, but I think this soldier’s been shot.” So they half-carried him down the street to the hospital, and he got a second hole in his back, to dig the bullet out. He still carries it with him.

This was not a heroic wound. Mark’s heroism lies in this: he stayed in that place, and continued to do his job. He interviewed the new guys, sent them off to places that he knew were as likely as not to kill or maim them. He saw every variety of spook, sniper, and Montagnard, plus the Green Berets that he had wanted to join, when they would cruise through to meet with the generals, in a bunker 65 feet below the clerks’ office. He heard their stories. Decades later he remembers the “horrible, gut-wrenching feeling, knowing how badly things were going.” His disillusionment, begun almost immediately after enlisting, became stronger, veered into bitterness, veered towards despair, But he kept doing his job, to the best of his abilities.

Decades have passed. Mark has made a good career in title insurance, raised two splendid daughters, endured some non-splendid marriages. He writes poetry, officiates at weddings, is a good and generous man. But the war is still with him. I finally realized this one day when I asked him how long he had spent over there. He looked at me for a moment, then said, “Eleven months, four days, six hours, thirty-two minutes, and twelve seconds. Approximately.”