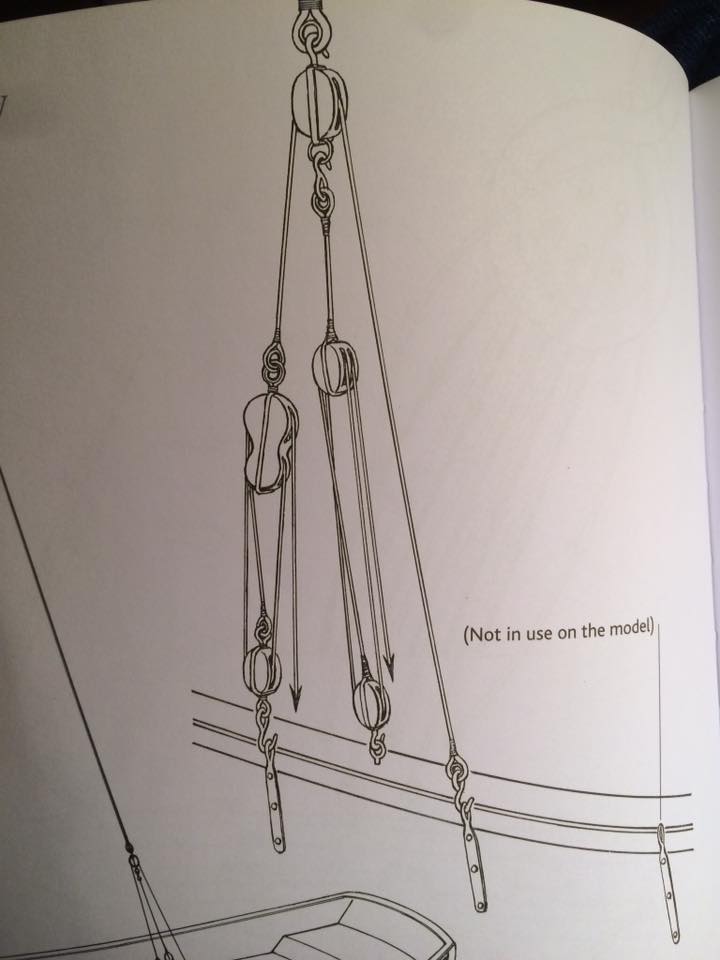 The old-school version of the answer is below. It is also a fuller answer, with commentary, but if you’d like to see the video version, I have uploaded it here: https://www.youtube.com/watch?v=MdxwhcmDj-8

Now on with actual text.

Last week’s Puzzle set a new high for views, a new high for entries – and a new low for correct answers. This was a tough one, and I commend all of you who worked at trying to figure it out. Note: I say this as one who didn’t have the right answer, either. That’s right, when I put it up, I was certain I knew the answer, but it turns out that I didn’t. More on this in a bit. Meanwhile the challenge was to determine the mechanical advantage of the arrangement below.

Let’s look at the three component purchases. The purchase in the middle has a 4:1 advantage*. That means that for every pound of tension you apply to the end, you get 4 pounds of tension pulling down on the topmost block. Mechanical advantage is “…the ratio of the force that performs the useful work of a machine to the force that is applied to the machine” (Merriam-Webster).

The line that goes through the topmost block produces a 2:1 advantage. This means that if you pull down on either end with one pound of force, you get two pounds of tension on the topmost block.

The purchase on the left is also 4:1. It uses a fiddle block instead of an ordinary double, but the power is the same. This purchase is attached to the line that goes through the topmost block, making a “compound purchase” in which the two advantages are multiplied. 4×2=8, so the compound purchase is 8:1.

Most entrants simply added this 8:1 purchase to the central 4:1 purchase, for a total purchase of 12:1. But remember, you have applied a one-pound downward pull on both ends to get the resulting twelve pounds of tension, so the actual mechanical advantage is 12:2, or 6:1.

That’s right, the combined effect of both purchases produces a lower mechanical advantage than the compound purchase by itself, which sounds crazy. At least it did to me until Bob Downes, BTYR’s resident genius, showed me the details. Basically, the total tension is higher with both systems engaged, but the relative input efficiency drops.

Out of all of the answers we got, only 6 were correct, and out of that group, our randomly-selected winner is … Matt Barnett! Take a bow, Matt, and be in touch with me about where to send your copy of Finding Pax.

I offered bonus points for an approximate range of motion for the assembly, and entrants were far more successful here. As many of you determined, the topmost block had a total range of motion of approximately one foot. Even if we made the rope ends longer, total range would only gain another 6” or so. This rather limits the utility of this arrangement, and it would take real finesse to keep an even load on both ends. Reader Theresa Danks imagined some sailors trying to make this setup work, and concluded that, “If they all quit in disgust at the ridiculous rigging job, there’s no mechanical advantage at all.” Well put.

Note that if you were to let go of the whip tackle and kept pulling on the center tackle, the range of motion would be a little over three feet (whoop de doo), but you’d have to give up a full third of your power to get it, and this would happen at the end of the hoist, where loads are usually highest. Some readers nevertheless attempted to come up with practical applications, suggesting everything from mainsheet to boat hoist to shiftable tackle to backstay adjuster, but far superior arrangements for all of these uses are readily available; this is just a ludicrously bad arrangement for use as anything. Except as a puzzle.

*We do not have space here to describe how a block-and-tackle accomplishes this gain. Another time.

If you didn’t win Kaci’s book, and haven’t read it yet, do yourself a big favor and get a copy. You can contact Kaci at Finding Pax,Or you can order it through all the stores and sites.

Be sure to visit the rest of our site, too, for books, dvd’s, tools, rope, workshops, and a whole bunch of rigging services.

Posting on Friday the 23rd: The Client From Hell