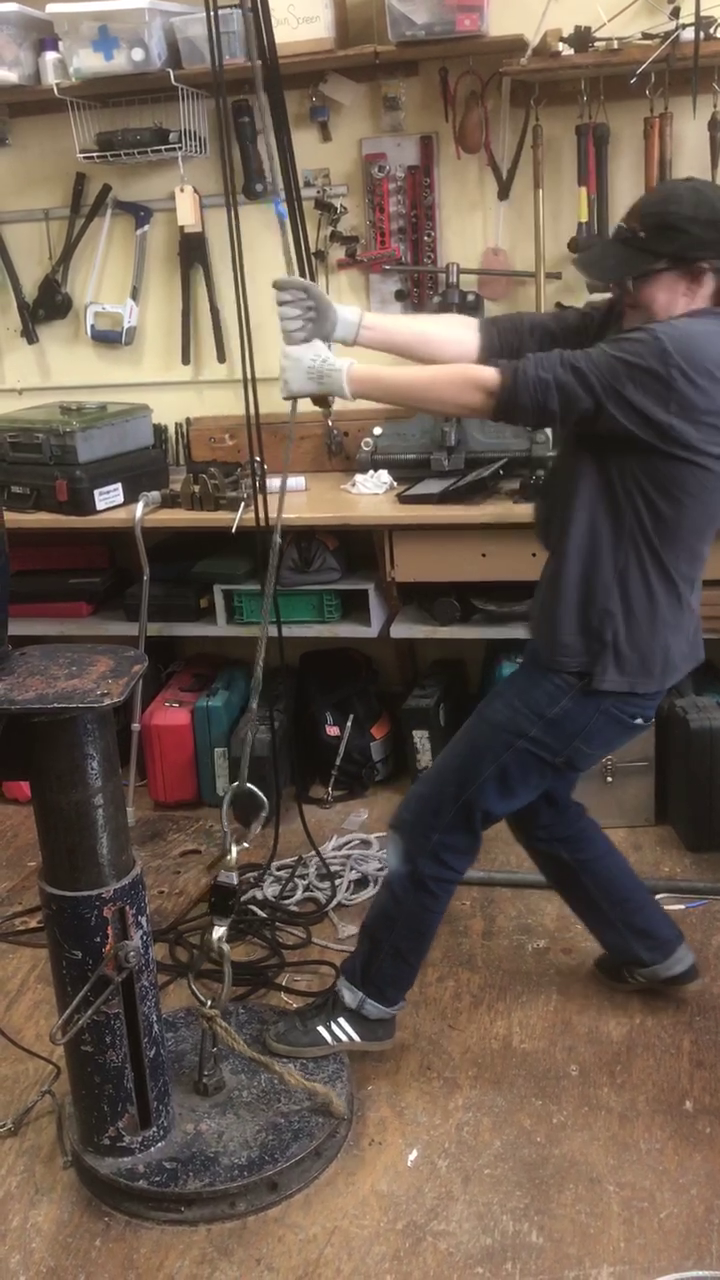 Sweating the Fall Things, the Winners!

In our most recent puzzle, we asked how much additional tension our rigger Julia Briggs could apply to a line by “sweating” it sideways. Here is the  puzzle, with accompanying video:

Sailors and other rope users are familiar with the process of sweating or swigging up a line: pulling sharply sideways on the fall of a purchase, above the belay point to gain a bit of slack, then quickly transitioning to a downward resolution, so that slack can be taken up at the belay point. The combination of leverage and impact-loading allows you to get more tension than you could by simply pulling down on the line. But the question is: how much more?

In the video below our rigger Julia Briggs is sweating a line in our shop. The line has been set to a starting tension of 200lbs.

The line is attached to a load cell that has been set up to read the maximum tension achieved.

So here is the puzzle: how many additional pounds of tension did Julia impose?

Congratulations to everyone who ventured an answer; there was some serious head-scratching going on out there. But the people who got closest to the actual answer tended to be the ones who used actual math, so to explain things, here is a simple-enough-for-my-level-of-comprehension explanation:

The maximum reading on that load cell was the result of two factors: how much force Julia could exert; and the angle that the rope formed at the peak of her pull.

Because she pulled very sharply, she exerted a shock load (accelerated load), which could easily be at least as much as her body weight, depending on how fast she was moving, how elastic the materials were, and how far she managed to deflect the line. For details on calculating shock loads here is a good site: sciencing.com/calculate-shock-load

As you can see from the video, Julia did not deflect the line more than a few inches, but this is actually a good thing in terms of getting a high load cell reading, because her leverage increases as the angle decreases, varying with the sine of the angle formed at either end of the line. If this sounds counterintuitive, there are lots of real-world applications for the idea. For instance, if you are a guitarist, you know how easy it is to “bend” a note up, tightening an already tight string by pushing sideways on it as you pluck it. Now try to get the same effect by pulling in line with the string (without using the lever known as a tuning peg), and you will see how powerful your leverage was. If you are a sailor, you know that as shroud angles diminish, tension on the shrouds goes up. And if you are an industrial rigger, you know that loads on sling legs go up as sling angles decrease towards the horizontal. For more on this, see the “Standing Rigging Design and Materials” chapter of  The Rigger’s Apprentice.

In our example, we started with an initial tension of 200 pounds, minimizing the ultimate deflection, and thus maximizing the potential leverage. Then Julia maximized the effect of her weight with the classic sailor’s Two-six-HEAVE, technique, building up her acceleration to an explosive final pull. And she maximized the shock load with good body mechanics, so that she was pulling perpendicular to the line, arms fully-extended and braced, on that final pull. The result was a load of 563 pounds (!), after deducting the initial 200 pounds. That’s right, she exerted almost four times her body weight on that line. In the real world, we are usually working with more elastic materials and bigger deflections, but you can see why sweating a line can be such a valuable force multiplier.

Given all the variables, it is not surprising that the answers were all over the place, and no one got within 10 pounds of the result, but several of you were quite close, so I expanded the tolerances, and am awarding prizes to everyone who got within 150 pounds, high or low. So congratulations to Nels  Backstom (672 pounds), Ian Duff (420 pounds), a reader identified only as “nopain” (480 pounds), CarlyP (670 pounds), Captain Mike (whose entry was closest, at 600 pounds), my dear friend Ben Stockwell (644 pounds), and Seng (715 pounds, which is 2 pounds over, but what the heck). All of you folks, please be in touch to let me know whether you want the audiobook or the ebook version, and whether it should go to you, or to be a gift.

For those of you who were outside the envelope, it is really easy to get a copy of Falling by other means, by going to Apple or Amazon.

In other news, those in the Seattle area can find me at the Seattle  Boat Show later this month, giving a series of talks about a variety of rigging topics. After that, I’ll be heading to Tasmania for some talks at the wonderful Australian Wooden Boat Show.