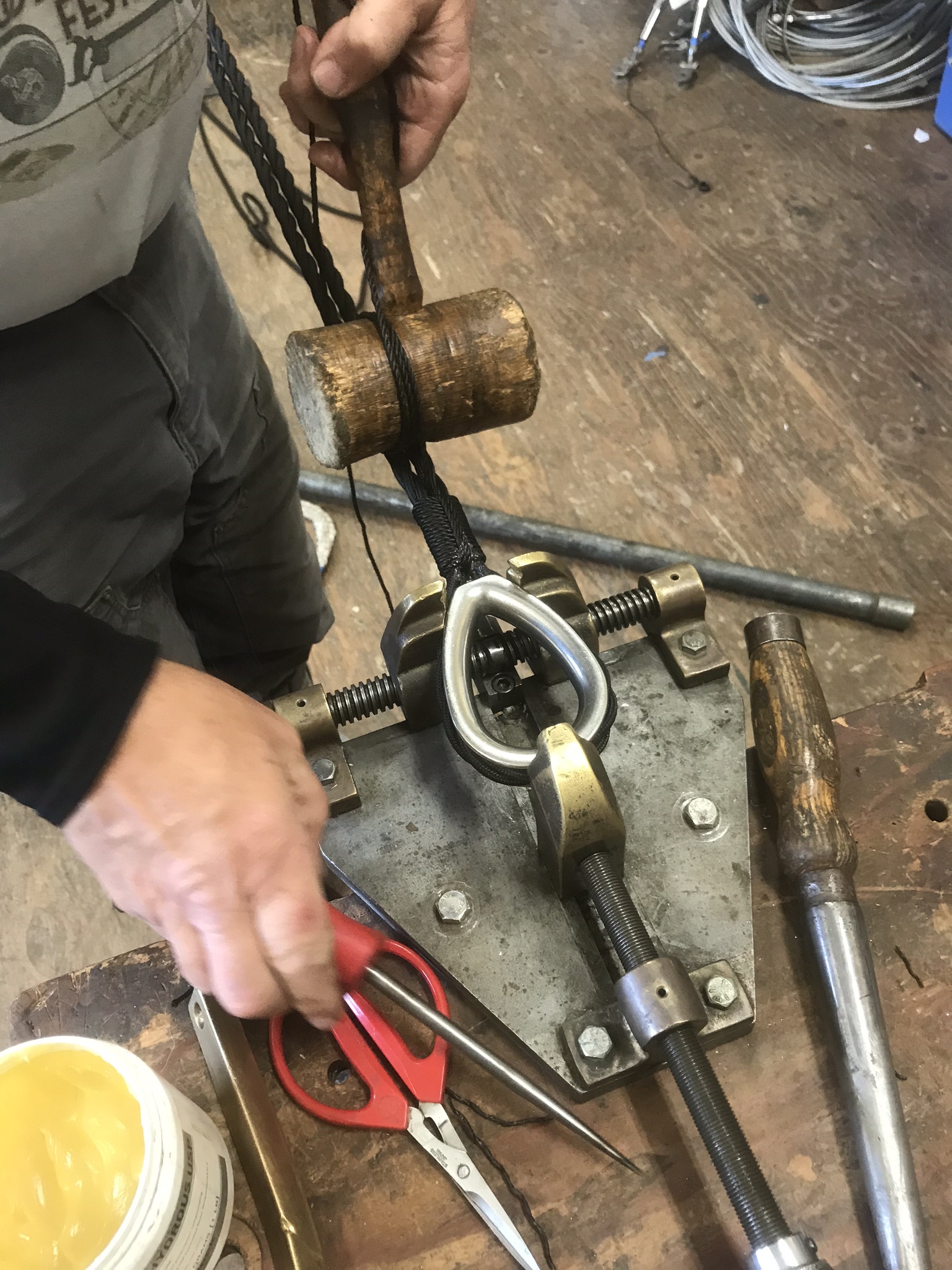 Most of the time we use turnbuckles for tensioning standing rigging, and block-and-tackle and/or winches for running rigging, but handwork for fabrication often involves tension, and for this we will sometimes revert to more atavistic techniques, like using heaving mallets. These are basically rolling levers, used to tighten seizings and other knot structures, drawing them tighter than one can do by hand. In the picture above, I am finishing a twine seizing on a lower shroud pair. That black rope is a high-modulus 3-strand rope from Whitehill. The core of each strand is made of Vectran, so the rope is about as strong as 1×19 wire of the same diameter, but much lighter. Marvelous stuff. Note that I would use a solid thimble for more significant loads than this vessel will impose on this piece.

The idea of shroud pairs is that you can make two shrouds from a single, continuous piece of wire or rope. That way you only need to make one terminal at the upper end, instead of two, so you don’t need as many eyes stacked aloft, in traditional configurations, or as many tangs, in modern configurations. But this trick will only work if the seizings are really, really good, such that if one leg of the pair is damaged and loses tension, the seizing won’t slip, and also slack the remaining leg. Seizings just don’t work on uncovered Spectra — too slick — but we have tested it to typical load limits on the Whitehill rope, and the most we got was a minor, expected deformation of the seizing. By the way, seizings are also not trustworthy on most “conventional” ropes, like Nylon and Dacron, because these ropes get much thinner when tensioned, so that seizings that start out very tight get very loose, and slip.

One tricky thing about using HM fiber rigging is that, while it isn’t elastic once it is set up, its strands need to be “settled” to remove any constructional stretch. This means pulling on it really, really hard, typically at least 5% of its rated strength, before measuring it and cutting it for its finished length. If you don’t do this, and just splice both ends, you can get a piece of rigging that might grow 6″ or more before it stops elongating. We tensioned the piece in that picture to somewhat over 1,500lbs on the rigging posts out behind our shop. We still use those posts for their original purpose — the relatively mild tensions needed for full-length service — but a significant portion of what we do now involves Whitehill’s rope, as well as the 12-strand Spectra from New England Rope and Colligo. The added tension has resulted in our heaving right out of the ground the concrete anchors to which our posts are stayed. This has happened three times now, but after the last time we put in some serious concrete boulders, and I think things will hold.

That’s fine, but the same increased tensions have wrought havoc on the hardware at the top of the posts. In the picture below you can see how the metal is just peeling away. We solved this problem by another form of old-school rigging: thumb cleats, onto which we landed Spectra grommets. I’ll post a picture of them in action soon. 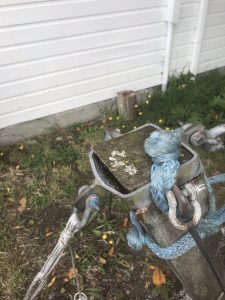 Our rigging post Wianno-Lorca, with its post-top hardware suffering the effects of excess tension.

Another, less dramatic application for heaving mallets is tightening Constrictor Knots, which are basically hose clamps made out of twine (seriously, they are sometimes used for that). Recently our star rigger Jen Bates, and her probably-soon-to-be star rigger son, Chance, teamed up to seize D-rings on a client’s boat. These D-rings live at chest height, usually on the upper shrouds. We run jacklines from the stern, up through the rings, then down to the bow. This way you have a higher barrier to falling overboard, and you can work with a very short tether, instead of dragging a long clunky one down the deck. Anyway, we apply 4 or 5 double Constrictors to the D-rings, onto a short portion of the shroud that has been served. Seizings and service are made with tarred nylon twine. The stuff is remarkably durable, as the setup on numerous circumnavigating rigs has proven. We treat the wire under the service to prevent crevice corrosion, and haven’t had any problems there.

To tighten the Constrictors, the team applies a heaving mallet to each end of the knot, then takes up together until the knot is hard. They never work loose. For more on this knot, and on heaving, see the Rigger’s Apprentice, or come by and visit the shop. 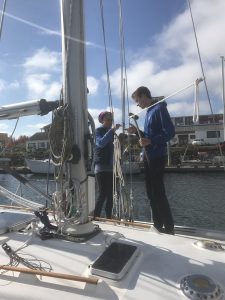 Jen and Chance setting up to seize on D-rings for chest-high jacklines.

PS, In writing this, I am reminded that I loaned some trusted person a heaving mallet  (Mallet de Mer) and a seizing screw, but for the life of me I can’t recall who it was. If it was you, would you return them? Soon?

My newest book, Falling, has been out for a little over a month now, and I am just going to go all proud-parent about it for a moment: Sales standings fluctuate frequently, but it is consistently in the top 20 in its categories on Amazon, and has had a few incursions into the top 10. Yay. It is an e-book, and to get your copy, click: Here. If you are on a Mac, get thee to iBooks. Reviews welcome!