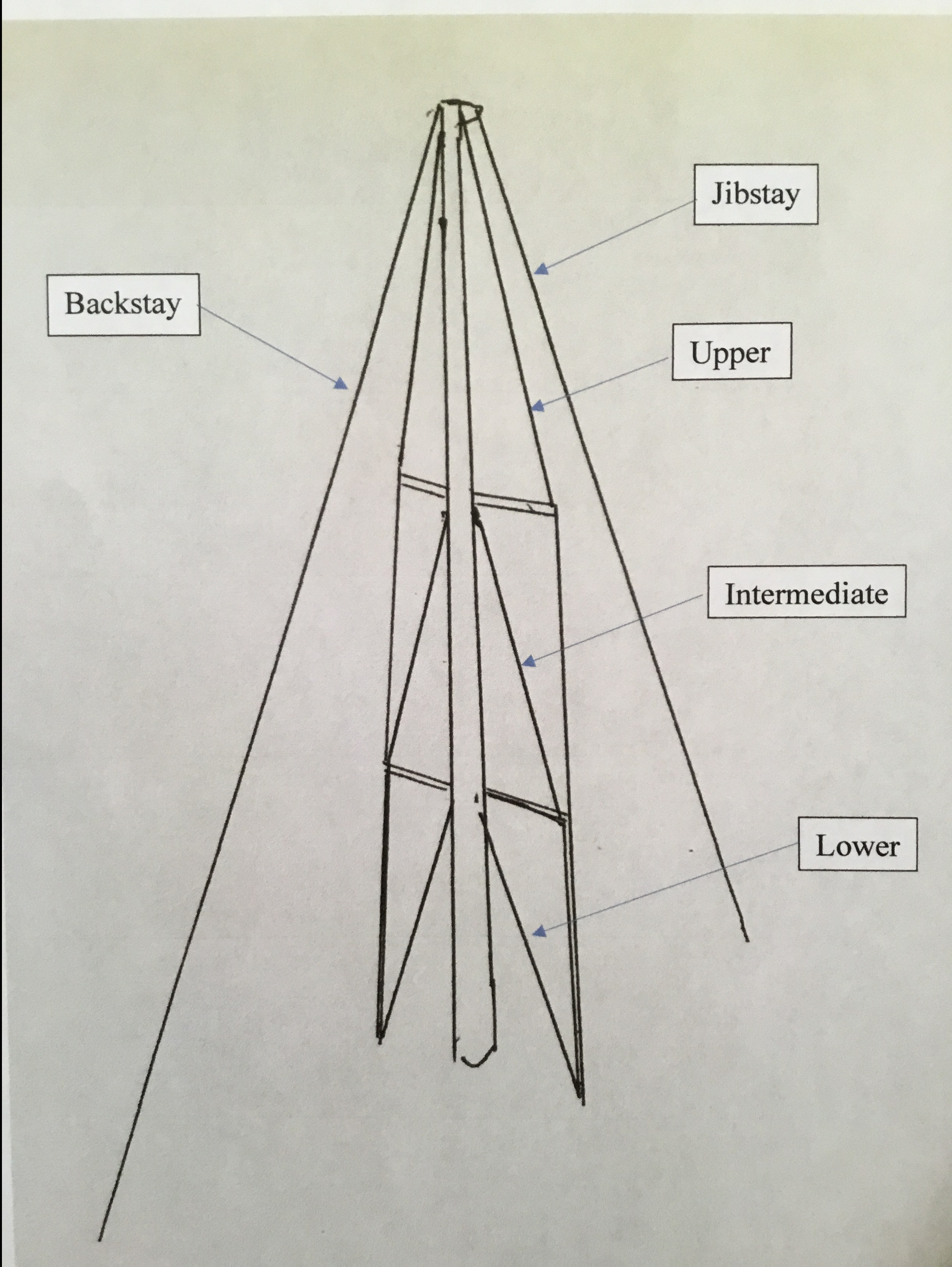 Name That Detune, Answers and Winners

Last week’s rigging puzzle, was about a puzzled rigger. Here’s an abbreviated version of the scenario:

On a boat with shrouds that attach to deck athwartships (directly out from the mast), the uppers were set up first, to a desired tension. Then the intermediates were set up. Then the rigger checked the tension on the uppers, and found that they were significantly slacker than they had been. What had happened?

For the full-length version of the puzzle, see Here

Up to speed? Good. Now for some answers.

By far the most popular response – and the most frequent cause of this exact thing happening in the real world – is that the mast’s support gave way. On a deck-stepped mast it could mean that the deck compressed, or that the compression post lived up to its name, or that the part of the hull that the compression post landed on had given way. “Squishy mast step” is how Steve Willie described it, and I urge you all to check for this problem; more than a few times we have undertaken the simple task of tuning a rig, only to discover that because of this problem there wasn’t going to be enough throw in the turnbuckles.

It is also possible for the base of the mast itself to give way, especially on keel-stepped masts, where rot (wood) or corrosion (aluminum or steel) can be at work in the moist environs of the bilge. This could literally be happening right under your feet, so lift up those sole boards and take a close look, regularly.

Many entries noted that if the mast isn’t going down, the deck or chainplates might be coming up. The latter is a possibility with a keel-stepped mast where someone forgot to set up the tie rod belowdecks adjacent to the mast. Not all keel-stepped masts have or need tie rods, but in the absence of a nearby structural bulkhead, for instance, they are the only thing that can keep the deck from buckling upwards from the compression loads imposed by the shrouds, and sometimes also from the loads on blocks for halyards that are led aft. If the middle of the deck goes up, the sides of the hull can go in, and the rig can slacken.

On very flimsy hulls, the portions of the hull that the chainplates are pulling up on can deform. This is “humping” as opposed to hogging. Hogging has nothing to do with rig tune. If a hull is humping, and if the rig is being tuned correctly, it means that the hull is not up to the task of sailing.

Some entrants had more dramatic suggestions. For instance, here are two of David Randle’s many suggestions:

The shrouds connect to the mast via T-ball fittings, and one of the uppers wasn’t fully seated in its slot but slipped in while he was working on the intermediates.

The mast was not fully seated on the step while tensioning the uppers, but finally settled all the way down after adding the tension of the intermediates.

These can happen, and when they do, they tend to do so with a serious bang. If this happens to you, get that mast back out and see what broke from the impact.

Several people suggested that induced bend might be the culprit, and this can happen, especially if you are starting from the top, and the backstay is also tightened at the same time. This is because almost every mast nowadays is thinner side-to-side than fore-and-aft, precisely because designers are counting on all the shrouds to prevent buckling in the lateral plane. If the shrouds are loose, but the stuff up top is tight, the mast can buckle, dramatically. How do I know this? Never mind. But the larger dimension fore-and-aft is what stiffens the mast in that plane, as there are no shrouds and spreaders to support it there.

It is also easy to get changes in tune simply by tightening shrouds unevenly, as several entrants pointed out.

Technically almost any material under compression gets shorter, including the stuff you make masts out of. But the kind of loads we are talking about would probably not produce shortening that would be possible to measure, let alone affect the tune of the shrouds. Think about it: if the mast compressed that much under shroud loads, then tuning would be a matter of gradually taking up on the standing rigging, trying to reach the desired tension, until the mast was a pancake.

There were lots of other ideas, and I’ve shown some of my favorites below, but now it is the time to announce our winners.

First, the randomly-chosen contributor of at least one valid response is …

Captain Pete Gustafson! His no-nonsense entry is as follows:

How about a soft or collapsing mast step? It could also be the deck straps that keep the deck from lifting are loose.

Congratulations, Pete, you are now the proud owner of my Rig Tuning DVD, or credit towards anything else in our catalog, as well as a copy of Selden’s excellent rig tuning guide. Be in touch to tell me where to send them.

The winner of our other prize, for the greatest number of somewhat realistic answers, goes to … Henry Schultz! Congratulations Henry, I actually/barely thought that 12 of your 13 entries had at least some merit. For your prize, you get exactly the same things Pete does. Be in touch.

Honorable mention to David Randle, who had just one valid answer less than Pete.

And now for a randomized list of further possible answers, taken from all entries. Thanks to everyone who took the time and effort to throw a light on this topic.

Temperature variance in the rig when adjusted.  Example, the uppers were done when the temperature was 35 and intermediates were done at 85 degrees.

The uppers stretched under the initial load after being tensioned, while he was fiddling with the intermediates. [This can happen with brand new wire]

He had installed a Corian step to replace some much pitted aluminum and with the combined strain of the shrouds there was molecular creep letting the mast down a little.

Throughbolts on the mast elongating the hole. [A surprisingly common problem. Likewise we see throughbolt failures. [Both problems can readily lead to dismastings]

One or more of the uppers’ swages (wire), rod ends (rod), or splices (composite) was/were failing and slipped. [Poorly-seated mechanical terminals can allow wire to move significantly before everything settles into place. Similarly, synthetic rigging must be stretched hard at first, to remove constructional elongation]

He neglected to pin the turnbuckles of the uppers, and while he was fiddling with the intermediates, the upper turnbuckles backed off.

His tension gauge was inferior or perhaps he used it incorrectly and all the readings were wrong anyway. [Words of wisdom. Just because you have one of those gauges doesn’t mean you know how to use it]

The uppers were adjusted at low tide with the keel resting on bottom thereby pushing the keel step mast higher the normal position when free floating.  Intermediates were done when floating. [Not a likely scenario, true, but correct in principle. It is why we never tune on the hard]

The rigger was at a wedding the night before and still pretty looped when he tuned the uppers. [My favorite]

Thanks again to everyone who entered. You have provided us all with food for thought.

If you would like to learn more about the principles and practice of rig tuning, you can find that abovementioned DVD at our Online Store and on Vimeo

Newsworthy note: our June Rig class is filling up, so if you were hoping to attend, contact catalog@briontoss.com soon.

This Friday, watch for “The Bounce,” the second installment in our “Not Falling Far” series.